Russian Federation
The History of the Palace

Revival of the original mission

In 1997, the Academy was relocated to Planernaya street, and the building of the palace was transferred into the ownership of the city of Moscow. Large-scale restoration works started here in the early 2000s and were completed in 2009. The main building regained its original image as perceived and implemented by Matvey Kazakov. 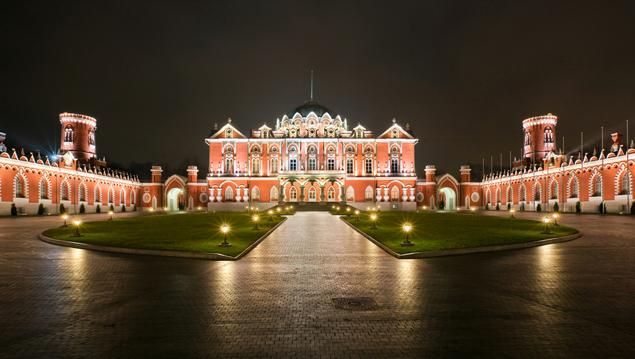 Nowadays the palace hosts the House of Receptions of the Government of Moscow, a press center, Petroff Palace Hotel and a museum and exhibition area.

There are 43 comfortable rooms in Petroff Palace Hotel decorated in line with the general architectural concept of the palace, including spacious standard rooms with one or two beds, superior rooms with an enlarged area, executive suites, and luxurious Catherine’s and Petroff’ Chambers. The hotel has developed special offers for banquets, weddings (including such service packages as the Classic Wedding, the Palace Wedding, the Emperor’s Wedding, the Hen-Party in the Palace, and the Bride’s Morning), birthdays both of adults and kids, historical tours of the palace, and opera nights. Of special note are unrivaled treats cooked for the hotel’s guests by the chef of its restaurant: a unique dinner with a restored historical menu that was served to mark the coronation of Nicholas II in 1896 году, traditional Sunday brunches, an original menu of a picnic in Petroff Park, and delicious Russian, French and Italian cuisine dishes in Putevoy Restaurant. One should not overlook an up-to-date health center built in the hotel. It includes a workout room with exercise equipment produced by leading international manufacturers and selected from the perspective of its efficiency and the requirements, age and gender of the hotel guests. There is also:

A Prestigious Star Award received on 16 March 2018 became a true triumph of Petroff Palace in its contemporary history.

Over a hundred nominees from all over the globe, who gathered at One Whitehall Place in London for this traditional forum, were eagerly waiting for the announcement of 20 company winners of 2017.

Petroff Palace backed by its priceless 240-year historical experience and expertise in the protocol of the highest level celebrations became the leader in the nomination of Most Prestigious Venue Russia. Over three months of preliminary voting culminated in the announcement of the short-list with the intrigue preserved till the ceremony day. It made the victory over royal castles, palaces and mansions, luxurious villas, renowned resort hotels, private islands, galleries and world-class restaurants ever more joyful.

Suffice it to say that the nomination of the Most Prestigious Gala Dinner Venue 2018 was awarded to the famous Emirates Palace Hotel (United Arab Emirates, Abu Dhabi).

But Petroff Palace went even further in its triumph: it joined the top three in the nomination of the Most Prestigious Reception Venue!

Inna Pekhova, the hotel’s general manager, believes that this is a well-earned victory. She says that the resurrected palace is now “breathing with a full breast” again, having become a venue of the “highest-profile and most important” activities of the state. An amazingly high level of its services can satisfy the requirements of the most demanding and top-ranking foreign guests and international experts.

Today the palace is recognized and popular as a travel and historical heritage site. The hotel’s staff is ready to accommodate each guest capable of duly appreciating its royal luxury and traditional Russian hospitality. Petroff Palace boutique hotel is ready to make you a crowned head on vacation during your stay within its walls!