The Russian Empire
The History of the Palace

Historically, the last segment of the way from the “Northern Palmyra” (Saint-Petersburg) to the first capital city (Moscow) was the only location where Petroff Palace – also known as the Access Palace – could be built. Monarchs and noblemen needed some place to stay at the end of a tedious journey, to have some rest and to make themselves look smart and presentable for ceremonial arrival in Moscow with much fanfare.

Today it is situated in the district of Airport on Leningradskiy Highway, in the vicinity of the notorious Khodynka field, directly associated with the palace. More on this to follow.

The palace’s beautiful, but unusual building is classified by some experts as Romantic Neogothic. Others believe it to be an example of “architectural eclecticism”. True, its styles and details are fancifully and eclectically intertwined creating unique forms and delighting the eye with their dissimilarity from any other building of this kind in the world.

Let’s take a short historical journey to understand the origins and life of this building that is now not only an 18th century architectural monument, but also an important administrative and business site with the functions of the Reception House of the Moscow Mayor’s Office, a VIP hotel and a tourist stronghold of the capital city. 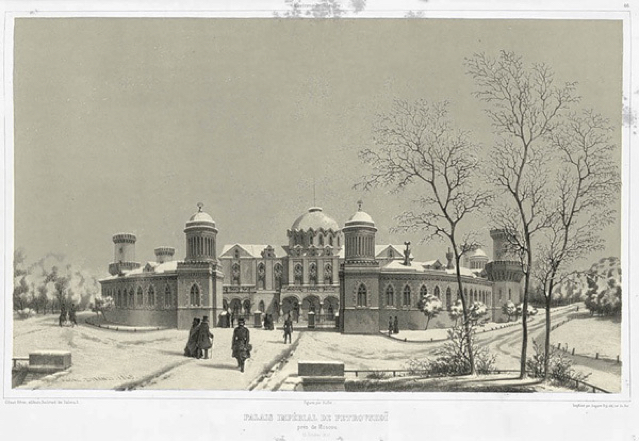 As early as the end of the 16th century, a wide road passed through the settlement of Tverskaya-Yamskaya connecting Moscow with such trading centers as the cities of Pskov, Tver and Novgorod the Great. This settlement was a terminal station for a great number of yamschiks, or coachmen, who ensured transport services on the main trade route.

Being aware of the needs of travelers regularly coming to Moscow and benefit making opportunities, entrepreneurial-minded owners started to arrange the first travel guest houses mushrooming in the vicinity of Vsekhvyatskoye village (presently the district of Sokol).

Foreign ambassadors set up their residencies in the Khodynka field where they could stay in comfort waiting for a high monarchical audience in close proximity to the Kremlin.

This courtyard witnessed many noble persons at various times. In the 17th century, Prince Gustav stayed here, when he came from Sweden to marry Xenia Godunova. In the dark Time of Troubles, regiments of Shuiskiy confronting False Dmitry II lodged here, followed by the impostor himself before he escaped. A legend about a treasure buried by him there is still alive.

At the end of the 17th century, the lands of the neighboring Vysokopetrovskiy monastery that had existed here since ages ago (was mentioned in chronicles of 1492) were devastated in the Time of Troubles and came into possession of Prince Nikita Baryatinskiy. Gradually they transformed into a tiny village of Petrovskoye with 30 inhabitants, three houses and a cattle yard. A surviving inventory of the estate includes description of a fine monastery garden that also passed to the new owner and a good quality house – “chambers on a stone foundation”. As a special sign of prosperity, “Dutch tiled stoves” are mentioned.

The administrative and commercial prospects of the horse-drawn route that passed through these lands were duly appreciated by Peter the Great, who in 1722 turned it into a civilized Petersburg road that subsequently connected the new capital city, Saint Petersburg, with Moscow.

The Palace is built

The Russian-Turkish war that started in 1768 was, according to various sources, the fifth or sixth conflict between Russia and the Ottoman Empire, and ended in 1774 with a convincing victory of the Russians and the signing of the Treaty of Küçük Kaynarca. Under that treaty, Russia received protectorate over the Crimea, several key cities with a great military value including Crimea’s Kerch and Enikale, and the long-wished-for access to the Black Sea with a full-fledged right of rule there.

The enthroned Catherine the Great decided to celebrate this outstanding victory with magnitude and splendor characteristic of her reign.

Especially for these festivities, architect Vasiliy Bazhenov built by Royal decree a whole wooden “mock town” representing the fortresses seized by the Russian soldiers in the battle. The oriental exotica never seen before at the court “with various fancies in the Turkish style” made a strong impression on the Empress’ inquiring and energetic mind. An idea sank into her heart to build a landmark en route palace in the same style.

The “mother czarina” was always as good as her words.

As early as 1775, Bazhenov’s best apprentice, Matvey Kazakov, was assigned the construction of chambers for temporary recreation of the top state officials and their immediate entourage. “But bear in mind, though I am Orthodox, my origins are German...” This note at the end of the Royal order became a guideline for Kazakov. It is no wonder that German Gothic elements can be seen in Petroff Palace.

Matvey Kazakov (1738 – 1812) was a Russian Neoclassical architect. Kazakov was one of the most influential Muscovite architects during the reign of Catherine II, completing numerous private residences, two royal palaces, two hospitals, Moscow University, and the Kremlin Senate. 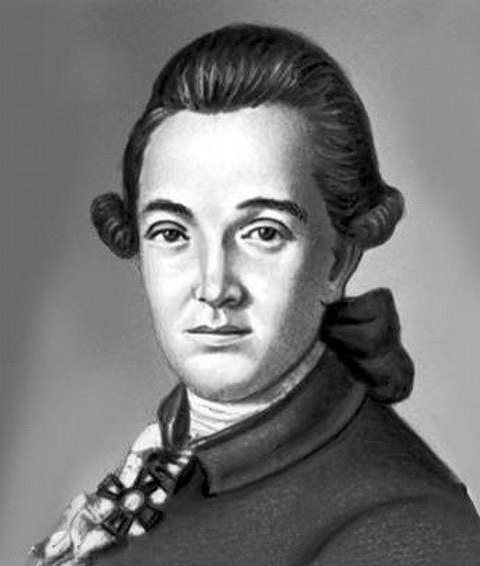 It took Kazakov only three years to brilliantly translate Catherine’s idea into reality. The last finishing works were completed by 1782. According to contemporaries, each detail of the en route palace testified to the victory and greatness of the Russian Empire. The building was nicknamed “a daytime illumination” because of its unusual bright forms. The architect mixed fancifully austere classicism, joyful Baroque and airy Gothic art. The palace was decorated with two towered wings in the then-fashionable Gothic and Moorish style. As a contemporary put it, it was “a splendid Moorish architecture building adapted to European ways”.

Kazakov chose a harmonious and precise location for the castle on the vast plot of land provided for its construction and skillfully arranged an effective composition based on red bricks and white stones. Contemporary research shows that the palace was originally painted in pink, golden, red and white colors. Its dome was covered with white Italian tin and the roof was topped with red tiles. 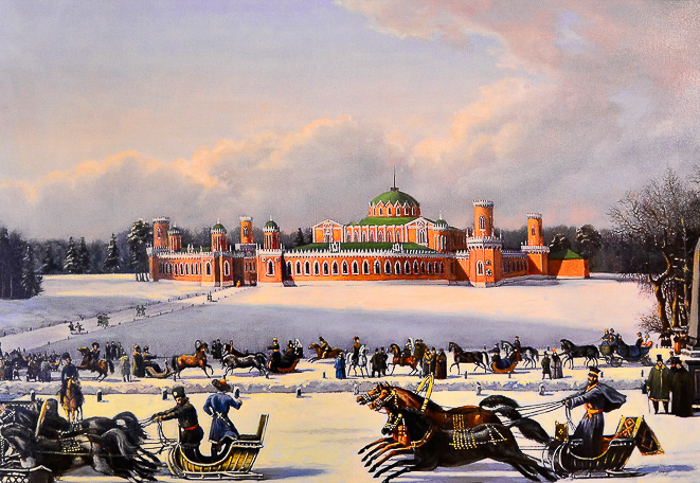 Catherine the Great wanted the 16-meter dome to resemble the dome of Hagia Sofia in Constantinople. The Empress saw some sacral significance in this resemblance. The genius architect, who enjoyed her particular benevolence, did his best to please her. Petroff Palace became a dream come true of the Russian czarina with “German origins”. The splendid palace park subsequently became a favorite place for promenade of old Moscow nobility.

It was only in 1787 that the Empress, being the inspirer of construction of the palace and its hostess, found an opportunity to visit it, according to an entry in her diary. It is also known that Catherine the Great decided to stay in her residence alone “protected by her people” and ordered off not only her numerous entourage, but her security officers as well. That decision was highly reckless, as it caused an inflow of onlookers and nearly resulted in trampling. It was remembered later during the bloody events on the Khodynka field. More about it is still to follow.

This is how a monarchial tradition was born

In 1797, Paul, a son of Catherine the Great, stayed in the palace on the way from Petersburg to his coronation ceremony in Moscow. This fact is noteworthy because it launched a tradition: from then on, all Russian emperors spent there the night before coronation. The walls of the ancient palace seem to retain the memories of monarchial aspirations and tribulations on the eve of ascension to Russia’s throne.

The greatest splendor marked the enthronement of Alexander II, when the Crown of the Russian Empire was put on his head in 1856. He also prepared himself for this official ceremony under the roof of Petroff Palace.

The legendary palace also hosted some uninvited guests. Thus, during the Patriotic War of 1812, Napoleon Bonaparte kept his headquarters there for several days watching Moscow in flames. After the French fled, the devastated castle stood charred with its dome collapsed for a long time.

Restoration of Petroff Palace started only during the reign of Nicholas I. The development of its project was entrusted to architect Auguste de Montferrand, who built Saint Isaac's Cathedral in Petersburg. The Emperor himself had received an engineering and technical education and had a knack for architecture. He personally guided the restoration process strictly in line with Matvey Kazakov’s original concept. In 1827, the monarch approved a park building plan for the territory around the palace that included curvilinear English park walks, ponds and bathhouses followed later by coffee shops, souvenir and food stalls, and even a small zoo. Very soon the park became a favorite place for promenade of Moscow’s upper class. A theater was built there, and some luxurious restaurants were opened in the years that followed. Thus Petroff Palace found itself in the center of Moscow’s cultural and social life. 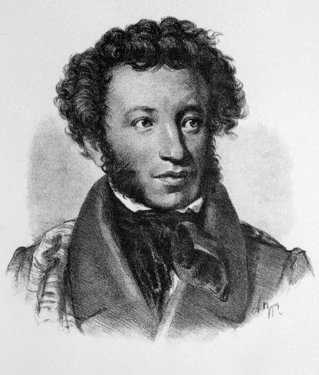 Here stands, with shady park surrounded,
Petrovsky Castle; and the fame
in which so lately it abounded
rings proudly in that sombre name.
Napoleon here, intoxicated
with recent fortune, vainly waited
till Moscow, meekly on its knees,
gave up the ancient Kremlin-keys:
but no, my Moscow never stumbled
nor crawled in suppliant attire.
No feast, no welcome-gifts - with fire
the impatient conqueror was humbled!.
From here, deep-sunk in pensive woe,
he gazed out on the threatening glow.

The events of 18 (30) May 1896 were destined to become the most tragic page in the palace’s history.

Khodynka field had traditionally been used as a venue of various activities, parades and military inspections. Official celebrations were also organized on that day to mark the ascension to the throne of Emperor Nicholas II.

The festivities ended in a bloody tragedy with crowds of people caught in mass trampling. Almost 1,400 people died, some 900 were injured. A bad omen marred the Emperor’s enthronement. It was often recalled in association with the tragic fate of the last Russian tsar and his family.